To ensure access to electricity at all times, off-grid solar systems require battery storage and a backup generator (if you live off-the-grid). On top of this, a battery bank typically needs to be replaced after 10 years. Batteries are complicated, expensive and decrease overall system efficiency. 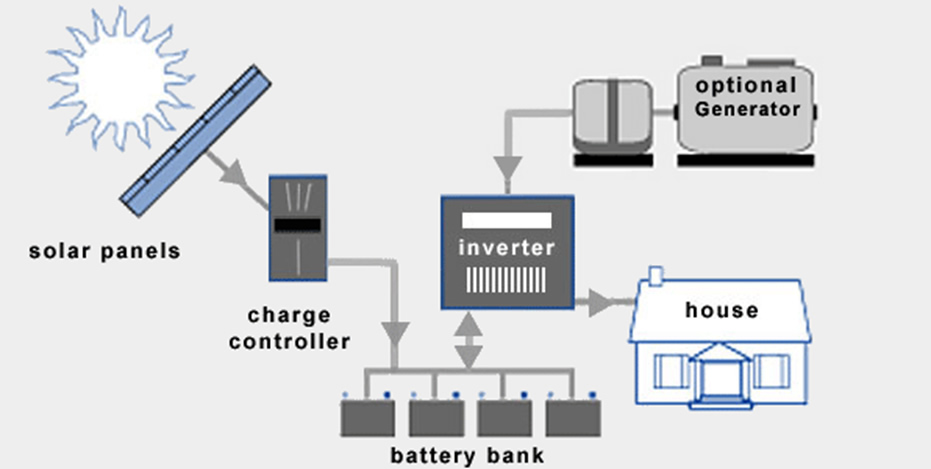 Living off the grid and being self-sufficient feels good. For some people, this feeling feeling is worth more than saving money. Energy self-sufficiency is also a form of security. Power failures on the utility grid do not affect off-grid solar systems.

On the flip side, batteries can only store a certain amount of energy, and during cloudy times, being connected to the grid is actually where the security is. You should install a backup generator to be prepared for these kinds of situations.

Solar charge controllers are also known as charge regulators or just battery regulators. The last term is probably the best to describe what this device actually does: Solar battery chargers limit the rate of current being delivered to the battery bank and protect the batteries from overcharging.

Good charge controllers are crucial for keeping the batteries healthy, which ensures the lifetime of a battery bank is maximized. If you have a battery-based inverter, chances are that the charge controller is integrated.

Without a battery bank (or a generator) it’ll be lights out by sunset. A battery bank is essentially a group of batteries wired together.

AC and DC safety disconnects are required for all solar systems. For off-grid solar systems, one additional DC disconnect is installed between the battery bank and the off-grid inverter. It is used to switch off the current flowing between these components. This is important for maintenance, troubleshooting and protection against electrical fires.

There`s no need for an inverter if you`re only setting up solar panels for your boat, your RV, or something else that runs on DC current. You will need an inverter to convert DC to AC for all other electrical appliances.

Off-grid inverters do not have to match phase with the utility sine wave as opposed to grid-tie inverters. Electrical current flows from the solar panels through the solar charge controller and the bank battery bank before it is finally converted into AC by the off-grid-inverter.

It takes a lot of money and big batteries to prepare for several consecutive days without the sun shining (or access to the grid). This is where backup generators come in.

In most cases, installing a backup generator that runs on diesel is a better choice than investing in an oversized battery bank that seldom gets to operate at it`s full potential. Generators can run on propane, petroleum, gasoline and many other fuel types.

Backup generators typically output AC, which can be sent through the inverter for direct use, or it can be converted into DC for battery storage.